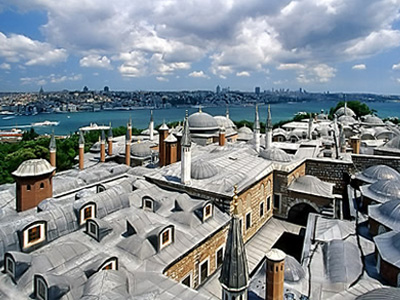 Topkapi Palace was constructed by Sultan Mehmet the Conquror in 1478 and was the administrative center and offical residence of the ottoman sultans until the construction of Dolmabahçe Palace by Sultan Abdülmecit some 380 years later. Once the courtiers began to disperse to live at Dolmabahce, Yildiz and other palaces, Topkapi Palace was emptied.

Once the sultans had abandoned the palace , many officals continued to live in it. The Sultan and his family took special care to visit the Mukaddes Emanetler Dairesi (Sacred Safekeeping Rooms) during each month of Ramadan therefore its upkeep was of utmost importance. It was during the reign of Sultan Abdülmecit that Topkapi Palace was opened to visitors for the first time. At that time, the British ambassador was shown around the Treasury of Topkapi Palace, a tour which later became at tradition. Topkapi Palace was annexed to the Museum Directorate on The 3rd April 1924 upon the order of Atatürk and after minor restoration, was officially opened to the public on 9th October 1924. 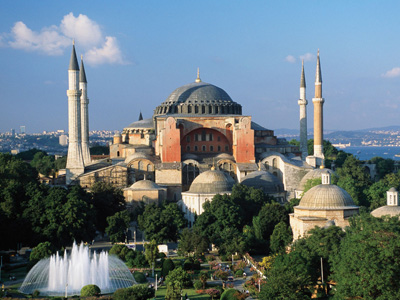 Haghia Sophia is accepted as being one of the wonders of the world in art history and architecture. Despite its age and size, it has survived intact to this day. Huge amounts of money were spent throughtout each civilization to keep the basilica in good order. After the conquest of Istanbul in 1453, Sultan Mehmet the Conqueror immediately ordered the conversion of the dilapidated Haghia Sophia into a mosque thus saving it from ruin. The buttresses were added by Architect Sinan, a prominent architect of the time, in the 16th century. The Fossati siblings reinforced the dome with steel in the mid- 19th century and the museum underwent further restoration as of the 1930’s. Haghia Sophia served as a church for 916 years and as a mosque for 477. Atatürk ordered its conversion into a museum in 1934 .Its magnificent Byzantine and Ottoman architecture have ensured that Haghia Sophia is one of the top three most visited museums in the country. 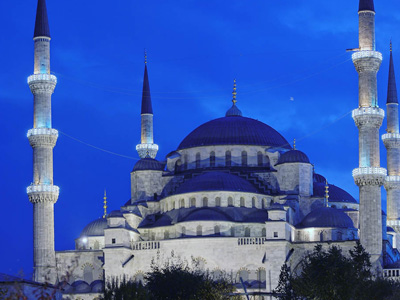 Blue Mosque was commissioned by Sultan Ahmet in 1609-1616 and constructed by Archited Sedefkar Mehmet Aga. The mosque is also known as the ‘’Blue Mosque’’ to foreigners thanks to its blue İznik tiles and blue calligraphy adorning most of its domes. After Haghia Sophia was converted into a museum in 1934, Sultanahmet Mosque achieved principled mosque status in İstanbul. Together with its complex of adjoining buildings, Sultanahmet Mosque is one of the largest structured in Istanbul. One of the leading aspects of the mosque from an architectural and artistic point of view is that it is adorned with more than 20 thousand İznik tiles.The tiles are decorated with yellow and blue traditional flower motifs which render the mosque more than simply a place of worship.Light streams through 260 windows and the calligraphy was written by Diyarbakirli Seyyid Kasim Gubari. Sultanahmet is the first mosque in Turkey to have six minarets. 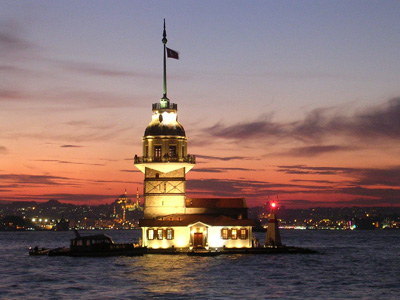 Through protecting its image from last century, The Maiden’s Tower, one of the symbols of Istanbul, has been dedicated to tourism and provides service with its restaurant and lookout balcony.

The maiden’s tower carrying the mystery of water, melancholy and myths is one of the most romantic and mysterious place of Istanbul. The construction with its own history is the center of interest with its legends which have been told for centuries. According to one legend, a king is told that his beloved daughter is going to be bitten by a snake when she is 18 and die.

So, the king builds the tower in the middle of the sea to protect her but a snake coming out of the grapes basket sent to the tower poisons the princess. As if it is trying to prove the inescapability of destiny, the Maiden’s Tower with a 2500 years history, is waiting for its guests in silence just to spite the noisy İstanbul. 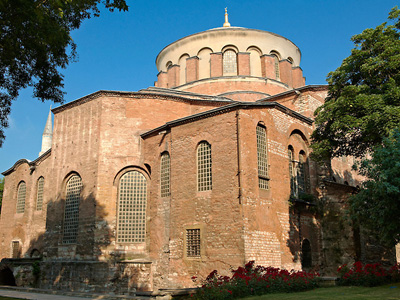 The church built in the 6th century could not be turned into a mosque as it is inside the palace. It was used as the arsenal of the Janissaries during the last period of the Ottoman Empire. Before it was moved to Harbiye, the Military Museum was also here. Inside the church there is a black cross placed on the golden floor which was the symbol of Byzantine churches. The sarcophagi of some Byzantine emperors that were behind the church have been moved to the Archaeology Museum. The building also hots music festivals due to its marvelous acoustic structure. 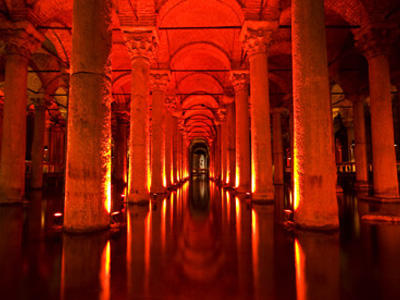 This is the biggest and most spectacular cistern in the city. The cistern's entrance is in the small building to the west of Hagia Sophia. The ceiling of the cistern, which looks like a forest of pillars, is covered with bricks and crosswise arches. It was named the Basilica Cistern because of a basilica which used to be in the vicinity. It was built during the region of Justinanus the 1st (527-565) to provide water to the palaces in the vicinity. The pillars are decorated with some plain and Corinthian-style pillar heads. There are 336 pillars in 12 rows of 28 pillars, and their dimensions are 170x70 meters. The level of water changed in accordance with the changes in the seasons. Water was distributed outside through pipes on different levels on the eastern wall. The marks left by different levels of water can be seen on the pillars. The floor was cleaned drunig the big restoration of 1984,unearthing from one meter of mud the original floor of bricks and marble blocks with the figure Medusa's head. 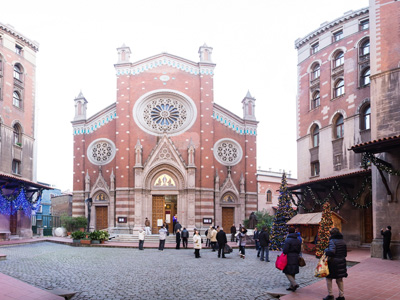 St. Antoine Church was built by the Italian architect Gulio Mongeri and opened in 1912. It has the highest number of Latin- Catholic members in Istanbul. It features depictions of St. Antoine and Jesus Christ. Muslim Turks also often visit the church.