It is possible to call Istanbul a city of palaces. Topkapı Palace, Çırağan, Yıldız Palace, to name a few , are architectural masterpieces reflecting Turkish sophistication. 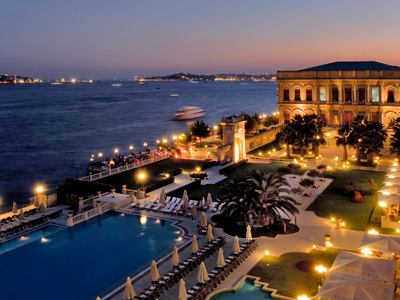 This was built in 1871 on the site of a wooden palace in the most beautiful part of the Bosporus by the Architect Serkis Balyan by the order of Sultan Abdülaziz. Superior examples of stonework are completed in rooms with elaborated pillars. The rooms are decored with unique carpets, gilt furniture, and engravings made of mother of pearl. Like other palaces of the Bosporus, the Çırağan sheltered many important meetings. It was connected to the Yıldız Palace by a bridge. The facade facing the street is surrounded by hing walls. It hosts various social activities today. 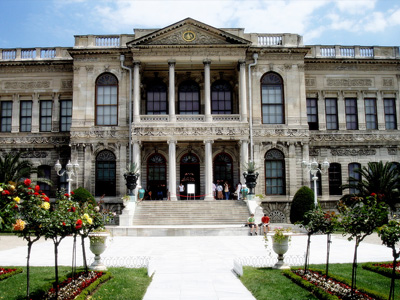 Dolmabahçe Palace, which was finished in 1856, was based on a 110,000mt2 area and is composed of 16 sections in addition to the main building. During the era of Sultan Abdülhamidthe second, a clock tower and the Heir Room were added. Built by two Ottoman architects , Karabet and Nicogos Balyan, the main structure of the palace is composed of three sections: The Selamlik, the Parade Hall, and the Seraglio. The Selamlik was used fort he private life of the Sultan and his family, and the Parade Hall, located between the two , was used for important state parades. Tha palace has 285 rooms, 46 halls, 6 baths and 68 toilets. These include the sultan’s bedrooms, his study and salons. Ataturk’s study room and salon are also here. 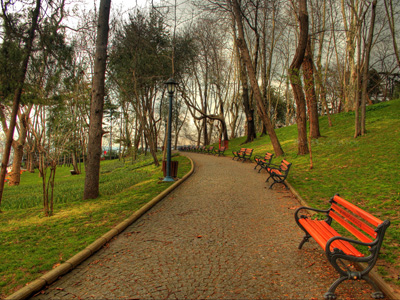 Gülhane Park is located between the Alay Pavilion, Topkapi Palace and Sarayburnu. It was one of the gardens of Topkapi Palace during the reign of the Ottoman Empire and was home to a forest and rose gardens. It was landscaped in 1912 and its total area of 163 acres was opened to the public. The park features busts of Istanbul mayors, and statues of Atatürk and Asik Veysel. There are also Gothic columns dating back to the Roman Empire. One of the leading features of the park is that it was where Atatürk demonstrated the Latin alphabet to the people on 1st September, 1928. When Atatürk’s funeral procession was leaving for Ankara, the final ceremony in Istanbul was held in the Sarayburnu area of Gülhane Park on 19th November 1938. Gülhane Park was left to rack and ruin for years before it was restored to its former glory in 2003. There is a tree-lined road leading through the center of Gülhane Park. There are rest areas and playgrounds located to the left and right of this road.

Water is sacred in all religions and it purifies the body and the soul. That dates back to the Romans and Turks turned it into a style combined with the cleanliness and hygienic rules instructed by Islam. When the word "hamam" (bathhouse) which meant the place where you was yourself, was added to the concept, this style was called a Türk hamamı (Turkish bathhouse). It became a culture with masseurs, pattens, bath stones, and marble washing platforms. In the past, bathrooms in houses were pirimitive and there was no running water inside houses. Thus bathhoueses were an essential part of the social life, especially of Ottoman women, who lived a closed life. Rinsing the baby at the end of his/her first forty days of life, evaluation of young girls by mothers of young men for marriage, and bridal baths prior to weddings were all social activities of the bathhouse culture. Stuffed vegetables(dolma), meatballs and desserts would be enhanced with dancers and musicians. Women of wealthy families would also bring their servants with them. Their pattens and cloths were made from valuable materials and they would leave generous tpis. 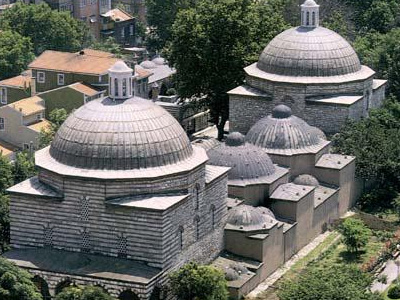 Turkish Bath an important place in Ottoman architecture. The Haseki Hurrem Turkish was ordered by Haseki Hurrem Sultan. Of Russian origin, she was the consort of Kanuni Sultan Suleyman. The hammam was built by Mimar Sinan and was the biggest Turkish bath of Istanbul.

There are entrances for men and women on the opposite sides of rectangular Turkish Bath. This type of Turkish bath, known as the “Double Turkish Bath” was built in compliance with İslamic law the serve women and men seperately. Haseki Hurrem Turkish Bath was restored in 1980 and opened asn exhibition room fort he Festival of İstanbul. Carpets are exhibited and sold here today. 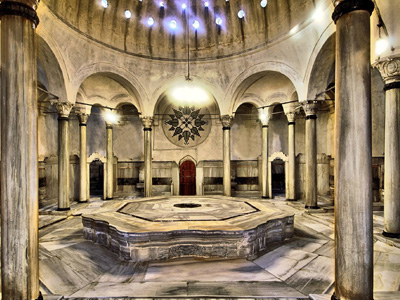 This bathhouse was commissioned by Nurbanu Sultan, mother of Sultan Murad III, in 1584. Its architect was Mimar Sinan. It is a double bathhouse with separate sections for men and women. 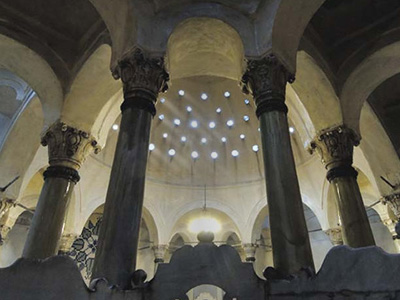 This bathhouse was commissioned by Sultan Mahmud I, and built in 1741 to raise funds for Hagia Sophia Mosque. Its architect in unknown. It is a double bathhouse with separate sections for men and women . It is the last big bathhouse inside which the baroque style was applied.